Vice President Report– Jim Ayers reminded us that membership dues are coming up, and we should see another increase in finances.  Some thought to generate ways to receive income aside from book sales are in the works.  Stay tuned for more information coming up.  Jim presented the minutes to be approved.  Minute meetings October 2015 were approved by Liz Tarbet, and seconded by Jackie DeFazio.  All is favor, Motion passed.

Secretary Report.  Tamara Drake passed out Minute meetings from October, as well as February for tonight’s discussion regarding Imagination Library. Tamara Drake reported emails sent this past notice was used through regular email.  She is conferring with Norma Mouton of how she sent previous emails.  Of the 31 sent, 14 replied received, 2 failed due to account quota full.  Our membership is much larger, so Tamara will continue to find a better way to send notices. Previously Mail Chimp sends to all 172 emails, but 60 members have no emails.  Those with no emails can only be informed if they come to a meeting.  We should think of another way to reach them.  Thank you for your patience.

Treasure Report– Linda Fogg requested Jim Ayers to read the financial report.  A copy was made available to each present member.

No questions regarding finance report.

Advisory Report- Jackie DeFazio:  Reported that Sno-Isle did the TedX simupresentation.  It was a great turnout, and it was amazing!  Sno-isle did an amazing job, and they will do it again next year and they will perhaps set aside 2 times into the program.

Jim Ayers brought up about Teen Suicide programs that support our young people through Sno-Isle.

Camano Library Report- David Menard reviewed about the Teen Reading Celebration was a success! Thanks to the Friends to help support it by providing pizza, and face paint supplies.  Linda Fogg has the receipts of the events, and has asked David to present the fees for approval.  Another great program is the Logo Construction for kids, $158.67.  Story time with Dena expense $30.30 for craft supplies.  Mary Jennings does several programs:  Lego, Home school Resource Fair, Story times, and decorates the children’s room seasonally, and has also purchased supplies for the winter 66.17.  Angie’s total for Teen programs is $200.15.  David also informs us that Sno-Isle provided funds for snacks for the TedX program, where he still has funds remaining to use as needed.  He talked to Paul on Monday, and was given permission to continue to use them for Teen programs.  Therefore he is feeling adequately funded in that area of need (about $200.00 left). 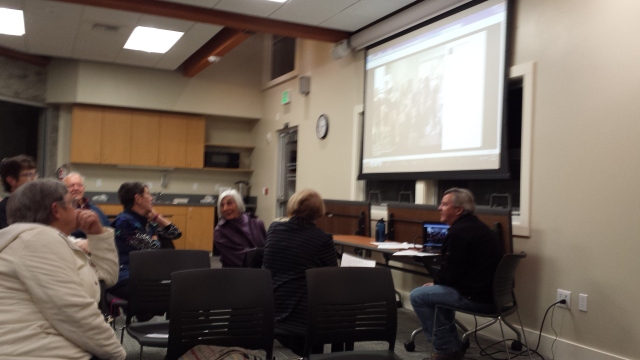 David Menard formally requests the motion to approve the expenses noted above.

Jim Ayer conducted the request to approve. Karen Schmidt made the motion, Ann Neupert seconded it. All in favor, no one opposed.

David informs us the next Teen Program is a Ty-Dye decoration event. We are not providing the shirts.

David Menard continues to inform us of the Home School Resource Fair was well attended all through-out the day. People were coming in and having access to many data bases for research.

Art Committee Report- Ann Barbas conveyed 3 more requests for artists to propose their ideas and present a description/concept of their proposal have been sent to artist for 3 more placements in the library as permanent art.  NEWS!  The art committee decided on the artist for the Reading Room.  We look forward to Dan Koffman’s art soon to be displayed!  Norma Mouton asked David M. to pass around copies of an email showing a mock-up of the art coming.  A question of how they are being funded was asked, and Jim responded: “all by private donation.  All are already paid for”.  Karen Schmidt asked, “Who is deciding what art pieces are accepted?” Jackie DeFazio explains, “The art committee in conjunction with the Sno-Isle staff, and the donor.”  Jim adds, he happens to know the donor for the children’s room, and he’s a soap box derby kind of guy, so it will have a soap box theme.  He doesn’t choose the piece or the artist, but he can have a little direction with the theme.  Jim continues to explain, “It’s the whole team of the art committee who works on the project, and puts out the call to the artists.”

Liz Tarbet asks: These pieces that are to be permanently here?  Jackie DeFazio and Jim Ayers replies, YES! They belong to Sno-Isle Camano Library.  Liz:  Guaranteed?  Yes! We don’t think the donors are going to allow art pieces to be moved!  Nor would we, commented Jim Ayers.  In addition to permanent art, there will be traveling or rotational art in the future.

Jackie DeFazio reminds us that these are matching funds for these pieces.  Donors contributed, in each case, the majority of the funds: half, and the other half, funded by the bequest that came to Stanwood Camano.  Attorneys agreed at the time that the bequest was drawn up; there was no Camano Island Library.  And so they agreed that the portion of those funds should come to the Camano Library.  And so, some of that money (actually all of it) has been used to fund the landscape lighting of the Pillar of Wisdom art piece by Josh Henrie (with the eagle).    Jim Ayers mentions for those who were not here last meeting, the Friends approved that expenditure. Old Business:

A discussion of the Imagination Library of whether to fund it in part or whole, and to what means does this allow or disallow other non-profit organizations from asking the Friends to support them.

Jim Ayers presents this prominent question:  This is a Rotary benefit.  If we choose to give to the Rotary, then what’s to say we should or shouldn’t support another organization?  Jim Ayers also informs us, they are looking to be sponsored with a $1000.00 per year for the next 3 years.

Jackie DeFazio opinionated her concerns, and reports she did talk with Jonalynn Wolf-Ivory who says Sno-Isle has the same concerns with sponsoring another non-profit.

Barbara Scott’s concerns address the issuing of repeated books given to families that already have that same book for an older sibling.  Her other concern, is that this is a charity.  She would rather see our money go to other book programs like ESL readings.  Or to make sure homeless people have the chance to learn how to read.

Karen Schmidt: There is some service going to that community…daycares.

Mike Shea addresses these concerns with his perspective from the meeting and how this decision is important. He explains, “As an active member of the Rotary, Terry Greer and I did meet at the February meeting which was well attended.  It was unanimously approved to support this program”.  He notes that he deposited at the front desk a new letter addressing the concern.  Which is the following; (as recorded, Mike Shea explains)

“We budget $12,000/year to provide a free book to any child from birth to age 5. I would think the library would be concerned about this pre-education process that we’re giving free to the now, 600 kids in the Stanwood/Camano Island community, monthly. And if we don’t get sponsors, our shrinking club, will not allow us to continue this level of funding.  That means 600 kids will suddenly stop getting these book monthly.  Again, there’s no affluent group that is selecting who gets these books.  Any parent in the Stanwood/Camano School District can simply fill out a form, send it to Rotary, we pay the money, and they get a book.  Any parent can do that. It’s amazing by volunteering here at the library, and have conversations with particularly mothers carrying a young child, and I ask if they know about if they know about the Dolly Parton’s club.  And they do and they are members.  So it’s very well accepted in the community.   I think that the 600 kids need support.  We need co-sponsors to fund it.  I think it would be a tragedy in the community that 600 kids would no longer get these books.  Granted Terry Geer request would love to have donors to annually give $1000 for 3 years.  But believe you me; I think we would be grateful to accept $1,000 that was promised in February.   That was my understanding as Rotary Club point of view.”

Jim Ayers, comments he wasn’t at that meeting.  Ann Neupert replies that she was present at the meeting in February, and she states, “There was no firm commitment.  We came very close, and needed to think more about it.”  Jackie DeFazio reads the minutes from February, and states, “No amount was mentioned, but the concept was approved.”

Discussion continues as Jackie DeFazio points out that the Stanwood Library Friends has $70,000, and what are they doing? $1000 is more than what we fund our own children programs.   Karen Schmidt points out that it sounds like we have to do something since it was already agreed.  Tamara Drake states, “It seems our organization is still forming our budget according to our last minutes, and perhaps we are just not formed within ourselves enough to decide.  We need to figure out and allocate where our money is to be spent.”

David Menard mentions that he’s asked the staff to come up with adult program budgets in January.

Due to the lack of budget formed, our purpose as friends were to help the Camano library, and since now it is a permanent library, our financial focus needs to be addressed. Jim Ayers presents the notion to table this idea once more due to needing more time to infer with ranking committee members: President, Treasurer, Secretary, and Vice President to go over some key elements to form our budget.  A proposal that in December we should discuss further of this commitment approved on.  Jim relates to Mike to inform Terry Geer there’s been a commitment to donate in the program.  It’s the level of commitment that we need to work on.  Barbara Scott suggests instead of December (as Jim stated), that January should be when we look at this due to the holidays.  Jim Ayers suggests we look at what’s spent by month for last year.

Jackie DeFazio reminds us we should strongly consider what our big picture should be. What Sno-Isle should pay for, what they expect Friends to do, as opposed to what is within their budget.  We don’t have a good sense yet of this yet.  We should ask Nancy Purscel, or Beckie Bolt, Sno-Isle representatives.

Bill Thorn interjects we should be careful as to what we do commit to pay for.

Tamara Drake questions –should we be a sponsor, how would the Friends be reflected?  Listed on a brochure?  It would help the PR with the community to show them how involved in the community we really are.

Mike Shea responded that we would be listed as a sponsor on the brochure.

Barbara Scott continued conversations about “if some commitment” is bound from us on our part, we should establish the amount. And we should form our policy and our budget so we have a basis.

Jim Ayers reiterates we will be working on those concerns when discussing the budget.

December 17th is our next meeting…it will be a Christmas Party, including Camano Library Staff!  Bring dessert potluck, and a book –!  Jim Ayers will bring the wine!

Liz Tarbet promotes that we should get gifts for the staff! Ann Barbas motioned to fund gifts to the staff, volunteered to get the gifts by Karen Schmidt who supports our local Terry Corner stores such as gift shop, in the same amount we did last year. Jackie DeFazio seconded, all in favor, none opposed.